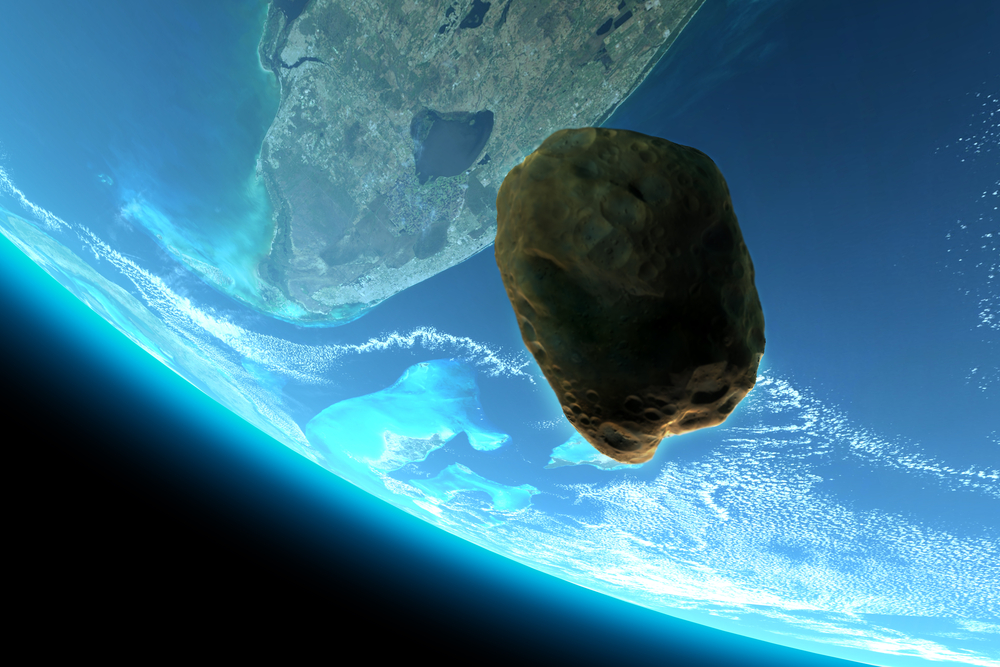 Astronomers are keeping close observation on an asteroid that has been named “Apophis’ which is derived from the Greek name for the Egyptian mythological figure meaning “the Lord of Chaos”.

This asteroid stretches about 1,100 feet (340 meters) across and will pass within 19,000 miles (31,000 kilometers) of Earth’s surface on April 13, 2029. Astronomers feel very confident that it will not pose any threat to the earth on this first trajectory to a near-earth miss. However, this same asteroid, Apophis is set to make another very close pass by the earth as it will swing back around in the year 2068 and some have stressed concern that it could strike the earth,

However, Astronomers are feeling confident that there is still a low percentage for impact but are also saying that under certain circumstances, the sun can heat an asteroid unevenly, causing it to radiate away heat energy asymmetrically which according to them, could result in a tiny push in a certain direction — this is an effect called “Yarkovsky acceleration’, which can change the path of an asteroid through space.

Astronomers have reportedly not measured this solar push on Apophis before, and haven’t taken it into consideration when calculating the threat the asteroid poses to us in 2068. According to the report, Those previous calculations revealed a tiny impact probability — which is around 1 in 150,000. Interestingly enough, one end-times expert named Tom Horn believes this asteroid will be the one that will bring about the fulfillment of Revelation 8 that foretells of “Wormwood” striking the earth and causing plagues and darkness.

Horn believes these Scriptures are referring to Apophis. In a podcast with Charisma Magazine published back in February of this year, Horn stated the following:  “The first trumpet sounds, and what happens? Fire falls, and particles fall down from heaven, burning,” he says. “And they catch the grasses and the fields on fire. That’s exactly what would happen ahead of a very large asteroid or body where you have the debris that’s being pushed out in front of it, breaking up as it enters the atmosphere.”

Secondly, Revelation describes a stone like a mountain that is burning as it falls down to the earth. It strikes the ocean, destroying the ships in the sea. Horn says this could be a binary asteroid, in which one part hits the earth and one part hits the sea. Or it could be one asteroid that breaks apart as it enters the atmosphere. In the third trumpet of Revelation, Wormwood pollutes and corrupts the waters.

And then in the fourth trumpet, darkness envelops the sky and blackens everything. “That’s exactly what would happen, with these large bodies hitting the earth, boiling the waters of the sea, causing them to rise up into the atmosphere, creating hurricane and tornado activity, impacting the earth,” he says. “The second part of it, knocking all this dust and debris up into the heavens—it would literally, for a period of two or three days, just as described in Scripture, blacken out the sun and the moon.”